Come for the beautiful proposal and stunning two-stone ring, stay for the hilariously confused reactions to …and then we drank each other’s blood. .. 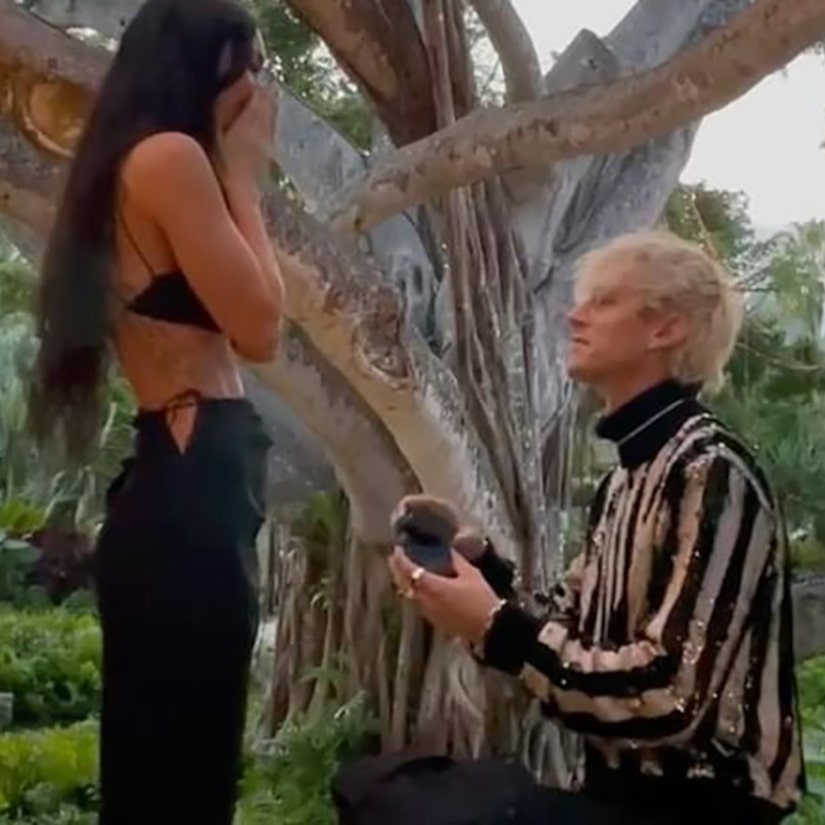 Come for the beautiful proposal and stunning two-stone ring, stay for the hilariously confused reactions to "…and then we drank each other’s blood."

It's social media official so it's real now. Megan Fox and Machine Gun Kelly have followed their spiritual twins in couple form, Kourtney Kardashian and Travis Barker, into engaged bliss.

The couple shared the big news to their social media accounts on Wednesday, with Travis, Kourtney and even Kim Kardashian among the first to share their congratulations. According to Fox's date, the actual proposal went down on Tuesday (but it did take time for MGK to edit down all those camera angles he had on her for the big moment).

Kourtney kept her congrats simple, commenting on Megan's post with five heart emojis, while Kim expanded into actual words, adding, "So happy for u guys!!!! ? ?♥️." Travis Barker was much more emphatic, jumping onto MGK's closeup of the ring he designed with a "F--- YESSSSS ?"

In his post, MGK talked about how he designed the ring he gave her with two stones, taking advantage of the fact that his birth stone is already the diamond. Megan's is an emerald. Working with Stephen Webster, the stones are "set on two magnetic bands of thorns that draw together as two halves of the same soul forming the obscure heart that is our love."

Sharing a video that has so many different camera placements the proposal itself was clearly as designed by MGK as the ring, Megan used her caption to share a bit of the story of their love, culminating in a final statement that's -- well, of course it is.

She shared that the proposal came under the same banyan tree they began their "short, frenetic" relationship under a year and a half ago. "We were oblivious to the pain we would face together," she wrote. "Unaware of the work and sacrifices the relationship would require from us but intoxicated off of the love. And the karma."

And that coda statement that kind of comes out of left field, unless you're familiar at all with this couple? "…and then we drank each other’s blood." Like you do.

The pair got congratulations from some of their other famous friends, too. "CONGRATULATIONS TO YOU BOTH!!!!!!!" commented an excited Drew Barrymore. Christine Quinn commented, "QUEEN! I am so happy for you! ?omg," while Addison Rae added, "Congratulations ❤️."

At the same time, several of Fox's followers were more than a little distracted by that abrupt shift at the end of her caption, while a few couldn't resist comparing MGK's look to the uniform Foot Locker employees wear.

And we're glad we weren't the only ones getting Angelina Jolie and Billy Bob Thornton vibes off of that one.

"Did he just come from his Foot Locker shift?" (brycetheompson8)"So you’re marrying the Manager from Foot Locker. Fantastic." (kimmyayres)"Why is he wearing a bedazzled referee shirt" (celeb_spellcheck)"You could’ve left out the blood part. You’re never going to be Angelina, Megan. I’m sorry ?" (vdunn1226)"Literally the weirdest choice of words… whyyyyy ?" (chelseyeagerxo)"The end of the caption pls?" (hachikinnie_)"Nobody reading that last line?!? Wtf ?" (shellxraex)"why are you drinking each other's blood ????" (ishangoyall)"Clearly staged with 5 different angles from cameras ? ?? keep drinking each other ?" (jaxicca)"How come no one is acknowledging the blood…. ?" (courtatuck)"What is this caption? And why does this look so staged PLEASE" (j.bray)"Why would you tell your fans that you drank your beloveds blood? That is dangerous and freaky. Not cool imho but whatever you make money so I guess let’s teach people about blood sacrifice with your platform?? Okayyy?? Anyone else turned off totally to that weird af comment?" (traveling.tulip)"Drank each other’s blood? Excuse me?" (waspssssss)"Final sentence is cringe x 5000" (uriahgracia)"both of u are so weird but congratulations! ❤️❤️❤️" (govetattoo)"You drank what?" (harryjowsey)"Omg so wonderful! I was waiting for this to happen. Except for the blood drinking. I was not waiting for that." (misstropolis)

Did you miss our previous article...
https://freshcelebrities.com/hollywood/lala-kent-claims-randall-emmett-repeatedly-cheated-on-her-talks-prenup-and-red-flags